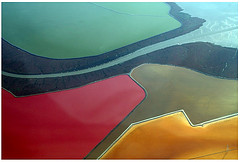 Before the salt in evaporating sea water turns white, it goes through stages of color that range from jade green to brick red, with variations of orange, yellow and other colors. From above the salt ponds around San Francisco Bay look like giant panes of stained glass. The shot above is from my latest set, shot on approach to SFO [airport in San Francisco, California, USA] last week. Here’s another series.

Meme: Joe Trippi's Eleven-Eleven 1111Campaign -
America's and Britain's Veterans have given so much.
Now, you can give back.

Tomorrow is Veterans Day, and now is our moment to encourage our friends, family members and colleagues to join us... http://bit.ly/9Iu9s
33 minutes ago from Facebook
1111Campaign
Eleven Eleven

Hey Joe! Britain's Veterans have given so much too!

Stand with 11 million Brits and Give £11 to Support Britain’s Vets!


Today, on Remembrance Sunday, while watching BBC1 TV coverage of the memorial ceremony from the Cenotaph in Whitehall, London, I heard the presenter, David Dimbleby, remark on a 10% increase in requests for help from Combat Stress, an ex-services mental welfare society set up to help ex-service personnel suffering from psychological injuries and mental problems.

In the United Kingdom, although two minutes' silence is observed on November 11 itself, the main observance is on the second Sunday of November, Remembrance Sunday.

Cherie Blair: Men responsible for financial crisis
The world would be a better place if women were running it


From ynetnews.com by Gil KoL 06 November 2009:
Quartet Mideast envoy's wife thinks world would be a better place if women were running it

Cherie Blair, wife of former UK premier and Quartet's Mideast envoy Tony Blair and founder of the Blair Foundation for Women, spoke Wednesday at a Jasmine – Women in Business conference hosted by the University of Haifa.

According to Blair, the current financial crisis was brought on by men, seeing how equality between the genders in the business world is still lacking.

Many believe that if women ran things the world would be a better place, she stated, adding that the world needs women, but it has yet to fathom just how much it needs them.

Blair's UK critics claim that she has been trying to capitalize off of her husband's role in public life and the international arena.

Ofra Strauss, director of the Strauss Group and president of Jasmine also spoke at the conference, but voiced her views in a somewhat different manner.

"The best way we can put the recession behind us is to incorporate more women in the workforce," she said.

"In the US, women's businesses have a $3 trillion annual turnover, and the government allocates proper resources to it. I hope our government does the same."

The Tony Blair Africa Governance Initiative has become a registered UK charity after creating a unique 'hands-on' approach to development and poverty eradication over the past eighteen months.

The Charity Commission approved the application from this relatively new organisation, which is underpinned by the belief that good governance and sustainable development are key to poverty eradication in the long term.

"I'm extremely proud of our excellent project teams who are working in partnership with the governments of Rwanda and Sierra Leone to reduce poverty and develop new opportunities for growth.

"It is a privilege to work with leaders as talented and as committed to their people as President Koroma and President Kagame who represent a new generation of leaders in Africa with a commitment to building a new future for their people.

"The developed world needs to keep up its commitment to Africa expressed at the 2005 G8 Summit in Gleneagles. But lasting change in Africa will only come in the end from African solutions. By building the capacity to create sustainable long-term development through good governance and providing high level advice, we have already started to help deliver that change.

"And it won't stop here. Whilst developing our work in Sierra Leone and Rwanda, we want to launch new projects with other countries, sharing our knowledge, experience and expertise. We want more countries to develop sustainably, paving the way to a prosperous future.

"This work has reinforced my optimism about Africa's future, as well as my conviction that governance and growth are the key ingredients to effectively reduce poverty across the continent."

Commenting on Tony Blair and the work of the Africa Governance Initiative, Ernest Koroma, President of Sierra Leone, said:

"Mr. Blair has demonstrated an enduring commitment to Sierra Leone and its people. The work comes at a critical stage in Sierra Leone's development. I believe together we have an opportunity to ensure that Sierra Leone puts in place the policies, people and institutions to achieve real and lasting change."

Commenting on the work of AGI, President Paul Kagame of Rwanda said:

"What I would like people to know is that the type of partnership we have with Tony Blair is totally different from the type of consultancy people are used to. We work in very strong partnerships whereby not only gaps are filled where they exist, but there's also the notion of transfer of skills, mentoring, actually doing things that are measurable such that over a period of time, we will be able to know what kind of impact was made."